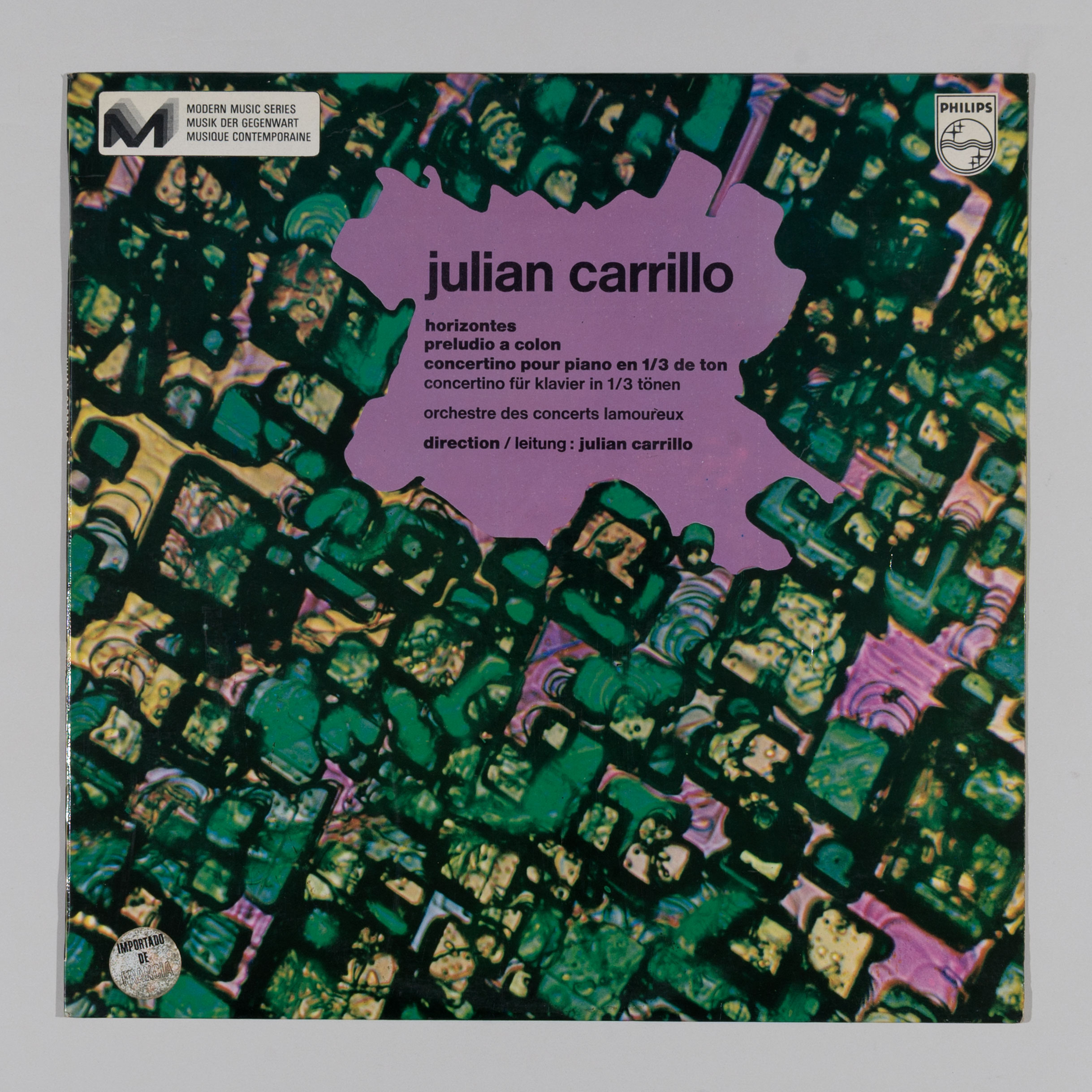 horizons
prelude to columbus
concertino for piano in 1/3 tone

JULIAN CARILLO was born in 1875 in the town of Ahualulco. His father, a farmer, lost everything he owned in the wars surrounding Emperor Maximilian. That was how the boy, who was orphaned at the age of three, experienced the worst of misery.

Because a musician from the neighboring town (San Luis Potosí) needed a guide for his blind mother, he took the child with him. Carrillo’s musical learning began in a tormented childhood environment. The boy showed extraordinary talents: he taught himself to play the violin at the age of ten. Fifteen years later he was reunited as a solo violinist with the Leipzig Gewandhaus Orchestra. There he also composed his first symphony. His life, which until now has seemed fantastic, would have given way to that of a professional musician if the Mexican revolution had not intervened. In the troubled waters of political life, Carrillo launched to the world the call of his musical revolution: ‘Sonido Trece'”.

Carrillo, the son of a peasant with Indian blood, faced our classical music in the most brutal way, without any period of aesthetic-social adjustment. In other words, he listened to them with ear and understanding of sound phenomena inherent in the oldest sensibilities of his race. In Mexico he was astonished to discover the basic laws of acoustics on the division of strings, and he continued his experiments with the greatest passion until he heard harmonies that gave him the sensation of a sixteenth of a tone. Throughout his classical studies he dreamed of multiplying sounds. But what he wanted to accomplish seemed so powerful that it took nothing less than the Mexican Revolution for him to finally get the courage to spread his message.

In the natural order of harmonies, the basic chord is repeated from octave to octave, according to classical acoustics. Carrillo sees this as nothing more than an approximation to reality, stating “that in reality all the tones that the harmonies produce are different”. The composer now formulated the principles on which he should build his new music: “Every vibration is a musical tone” (1917); can in the range of 30,000 tones, which the human ear can grasp, draw freely. Why, says Carrillo, do you want to limit the octave to twelve tones? If we want to keep these intervals as orientation points, we can expand them into 18, 24, 30… 96 parts, which then give us the thirds, fourths, fifths… and sixteenths of a tone.

The artist did not hesitate to face the problems of renewing the musical structure and those of a new way of writing. Starting in 1920, he gathered the necessary material to compose, and shortly after presented to the public a concert of his works, among which the “Prelude to Columbus” recorded here was included. In 1927 he had the idea of ​​assembling fifteen pianos (normal keyboard, special frame) that would allow listening and composing in fifteen different moods and that would also allow the passage of the same musical structure through the filter of the different moods. Unfortunately, the composer was conceded that these pianos could not be built before 1958. However, a first draft he had written on the eve of the war had enabled him to compose the “Piano Concertino in Thirds”.

The figure of the discoverer Christopher Columbus did not give rest to the visionary thoughts of the musician. But the sense of transcendence of this glimpsed world veiled his message with humility. True, in the quarter tones he knew himself in familiar waters and extended his lyricism a lot, but in the third and sixteenth tones, one feels him exploring new “horizons”. He does it with a little anticipation and a little fear, from which suddenly comes a breath of fame and the intoxication of the explorer, who is the first to enter unknown lands.

This record recorded in stereo can, thanks to a new technique, be read indifferently on any modern turntable equipped with a light head. However, stereo effects will only be reproduced by a stereo device. 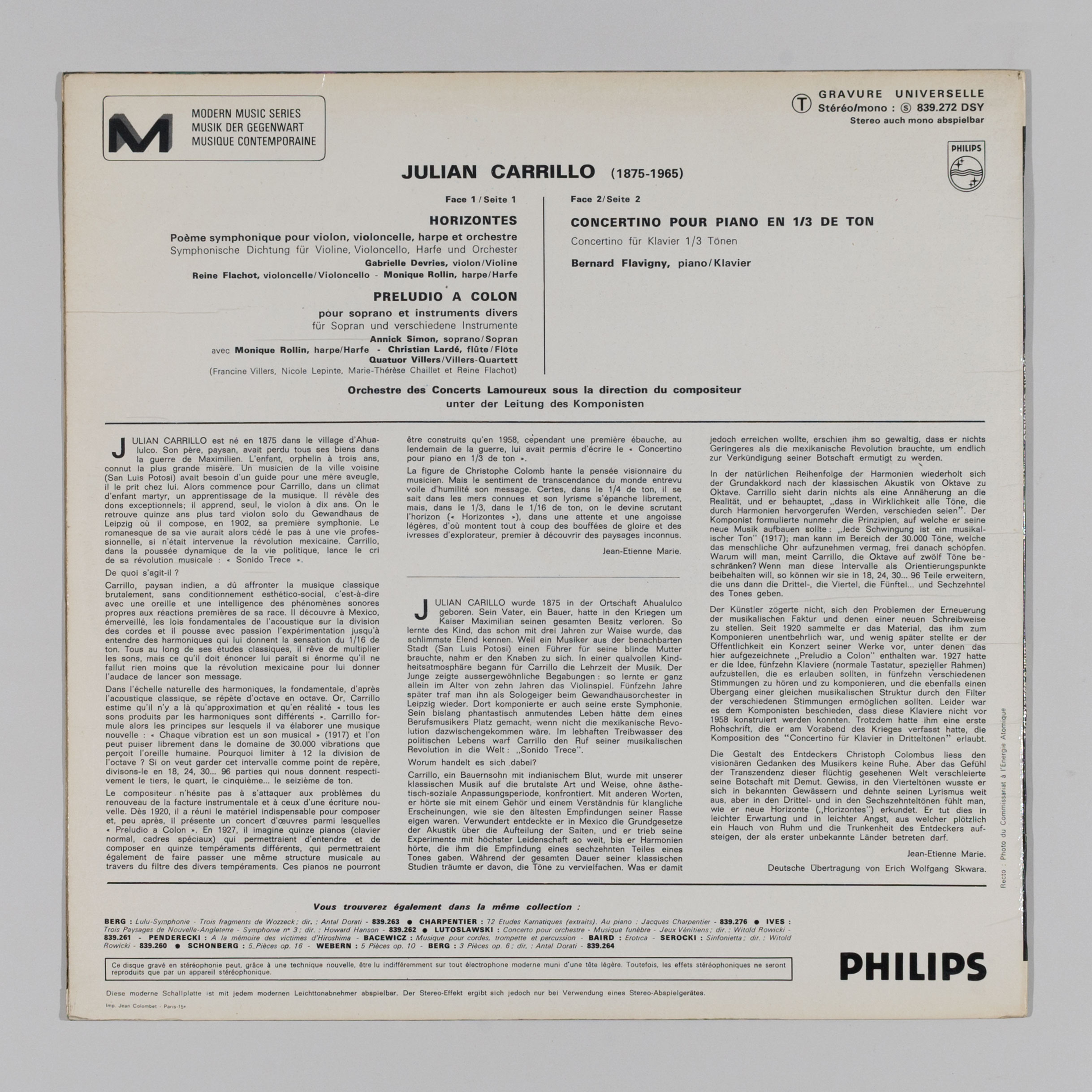 From the Paris Opera

Information on cookie and cover is in German and French.