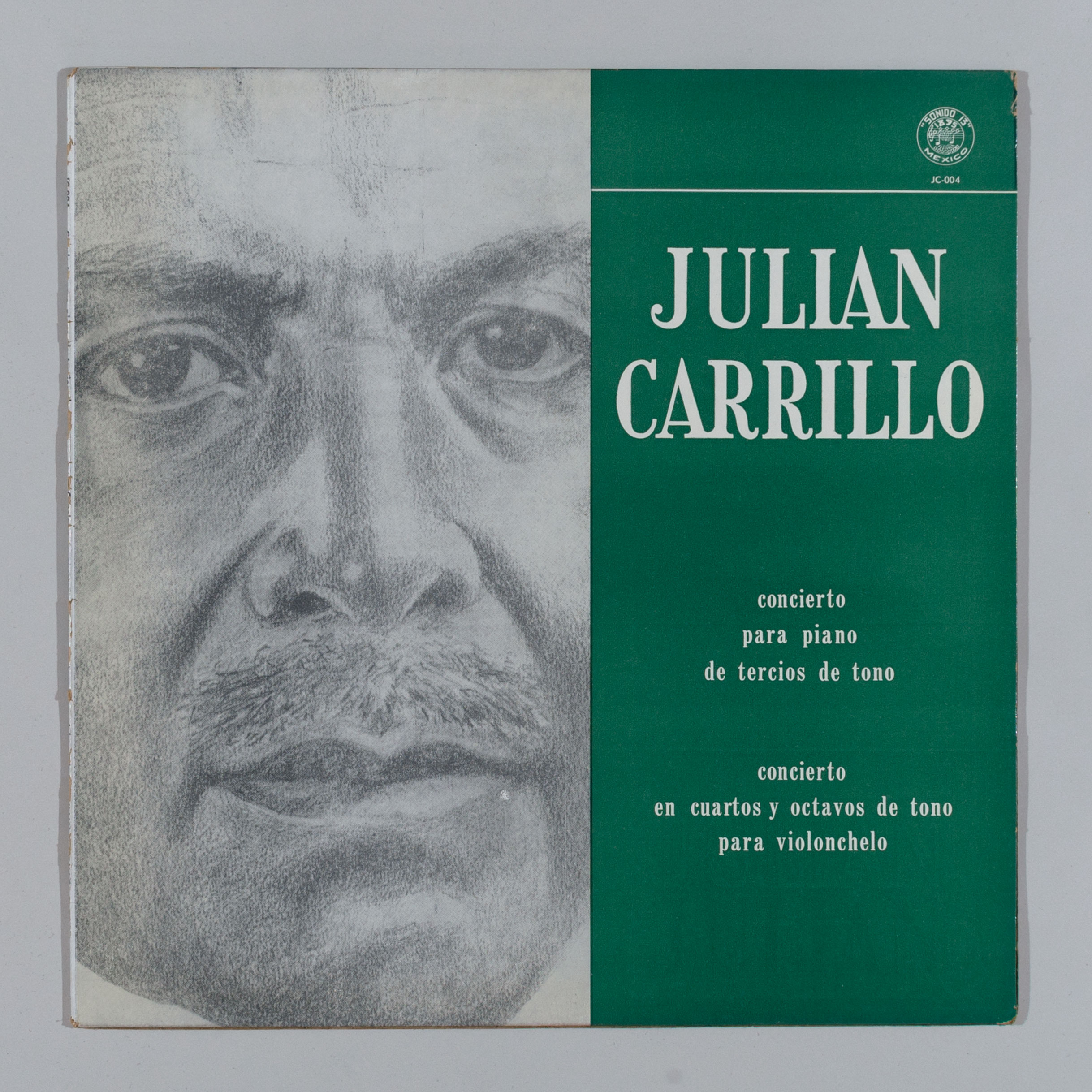 CONCERT FOR PIANO IN THIRD TONES

Lamoureux Symphony Orchestra of Paris under the direction of the author.
Soloist: BERNARD DE FLAVIGNY

Since 1895, Julián Carrillo discovered the sixteenth tone, but he continued his searches, experiments and first achievements almost in silence; This explains why eminent European musicians, unaware of the Mexican master’s discoveries, thought about the problem of third tones until much later.
That is why Busoni, in the year 1922, shortly before he died, wrote: “Sixteen years ago I conceived a possible theoretical system of thirds of tone, but to date I have not been able to decide to proclaim it definitively. The intervals of whole tones, used by Liszt and Debussy, are by way of a hope that one day they will be filled with intervals of third tones NOT YET EXISTING.”
In 1949, responding to a survey of the “Figaro”, Florent Schmidt declared, “that it was time to go in search of the thirds of tones”.
On that same date, J. Carrillo presented in Mexico a special composition for a third-tone piano that he had built, the first link in the chain of fifteen “metamorphosing” pianos that gave its inventor the Great Gold Medal in the Universal Exhibition of Brussels in 1958, “for the high cultural value they represent for humanity”.
This first composition later became the central “slow tempo” of this “Concert” which was premiered on November 9, 1958 at the Palace of Fine Arts in Brussels, in a concert presided over by Her Majesty Queen Elisabeth of Belgium, being soloist on that occasion Miss Dolores Carrillo daughter of the teacher.
Claudio Delvincourt, who was director of the National Conservatory of Paris when listening to this Lento in the Fauré Hall of the Institute itself in 1950, exclaimed: “It seems to me that I am contemplating the horizon of future music.”

Bernard de Flavigny at the age of fifteen, he received the First Prize of the Paris Conservatory. He completed his musical studies in composition, studying with Olivier Messiaen and the Fugue with Mme. Honneger.
In 1948, he won the First Prize at the Prague International Competitions, is considered one of the first pianists of his generation, and has toured Europe, the Far East and America as a concert pianist.

CONCERT IN QUARTER AND EIGHTH TONE FOR CELLO
Lamoureux Symphony Orchestra of Paris under the direction of the author.
Soloist: REINE FLACHOT

This work premiered at the Palace of Fine Arts in Brussels, during the Universal Exhibition in 1958, in a great gala concert dedicated to the compositions of Julián Carrillo and which was honored with the presence of Her Majesty Queen Elisabeth of Belgium, who expressed his opinion in a beautiful autograph that reads as follows: “To the great composer Julián Carrillo, in remembrance of admiration for his beautiful and moving music that I heard at the Palacio de las Bellas Artes on November 9, 1958.”
On this occasion the author conducted the Orchestra of the National Institute of Belgian Radio.
The work is grandiose and demands an extraordinary virtuosity from the performer. The use of Intervals of fourth and eighth tones makes it necessary to have all the resources of a new technique and the harmonics are used to the extreme limit.

Reine Flachot was born in the Argentine Republic of French parents. She began her musical studies in Paris at the age of eleven; and three later, she won the First Prize of the Conservatory, competing with twenty-seven contestants. In 1954, she won the Piatigorsky Prize by unanimous vote of the jury.
Since then he has played in numerous concerts. In France with the “Concerts Colonne”” under the direction of Katchaturian; with the “Orchestre National” under Darius Milhaud; with the “Orchestre Philarmonique de la R. T. F.” under the batons of Eugene Bigot, Manuel Rosenthal, Jean Martinon and Pierre Dervaux, In other European countries she has been heard in recitals and as a soloist with the orchestras of Berlin, Vienna, London, Amsterdam, Geneva, Brussels, Lisbon, etc. where she has always obtained the highest praise from the press, which can be summed up as the opinion of the Austrian critic that perfectly defines his musical personality: “Reine Flachot is the personification of the modern virtuoso, dazzling with objectivity and decision; in it burns the inner flame of the musical joy of authentic inspiration”.
“The eminent Leopold Stokowski gave his opinion about the piano concerto in the following terms: The third tones are absolutely clear, the themes of his “Concertino” are perfect for the demonstration of the new sounds: the most notable of all is the POETIC QUALITY OF THAT MUSIC AND THE BEAUTY IN IT. Your Concertino is a poem of great beauty and imagination and it has been a pleasure for me to listen to it. The third tones are perfectly presented and show immense possibilities for the future “.

JUDGMENTS of the European Press.

“These compositions show us that, in addition to the impact of absolute novelty produced by their chromaticism, they are those of a composer with a temperament of great refinement and sensitivity; and from certain points of view they achieve with “live music”, effects that practitioners of “concrete music” try to achieve by artificial means”.

“Julián Carrillo’s ultrachromaticism has absolutely no relation to any of the traditional scales, but rather TAKES US TO AN ENTIRELY NEW WORLD THAT DOES NOT MAKE US THINK, BUT SUBMERGES US IN A STATE OF ECSTASY”.

“The excellent cellist Reine Flachot gave us a splendid version of the Concerto in fourth and eighth tones, in whose first time the soloist describes passages in harmonics that are only compared to those that Paganini dignified in his works.
In this Concert, Carrillo, the Mexican genius, triumphed as the inventor of a new music rich in possibilities and was warmly congratulated by Her Majesty Queen Elisabeth, at the end of this dazzling evening”. 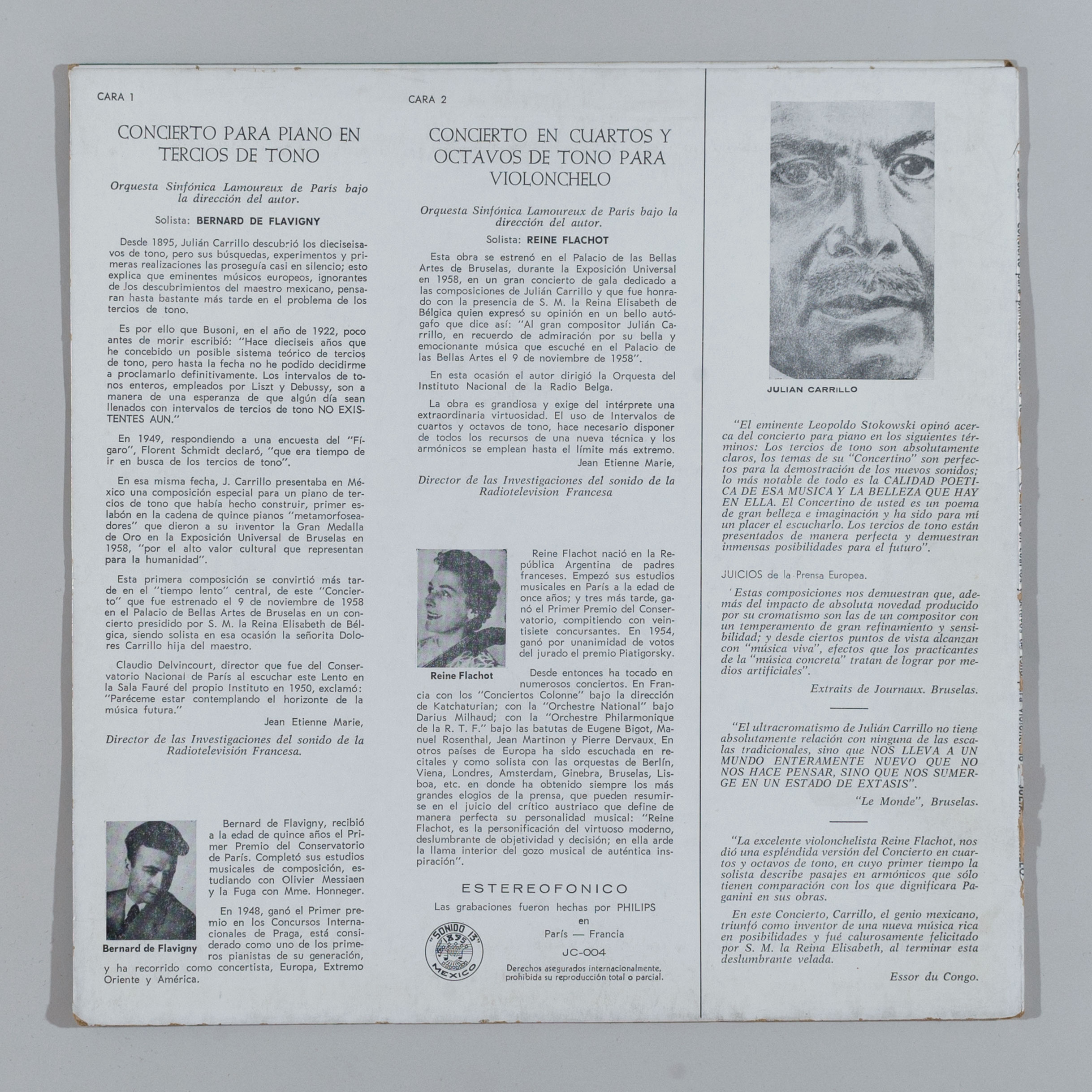 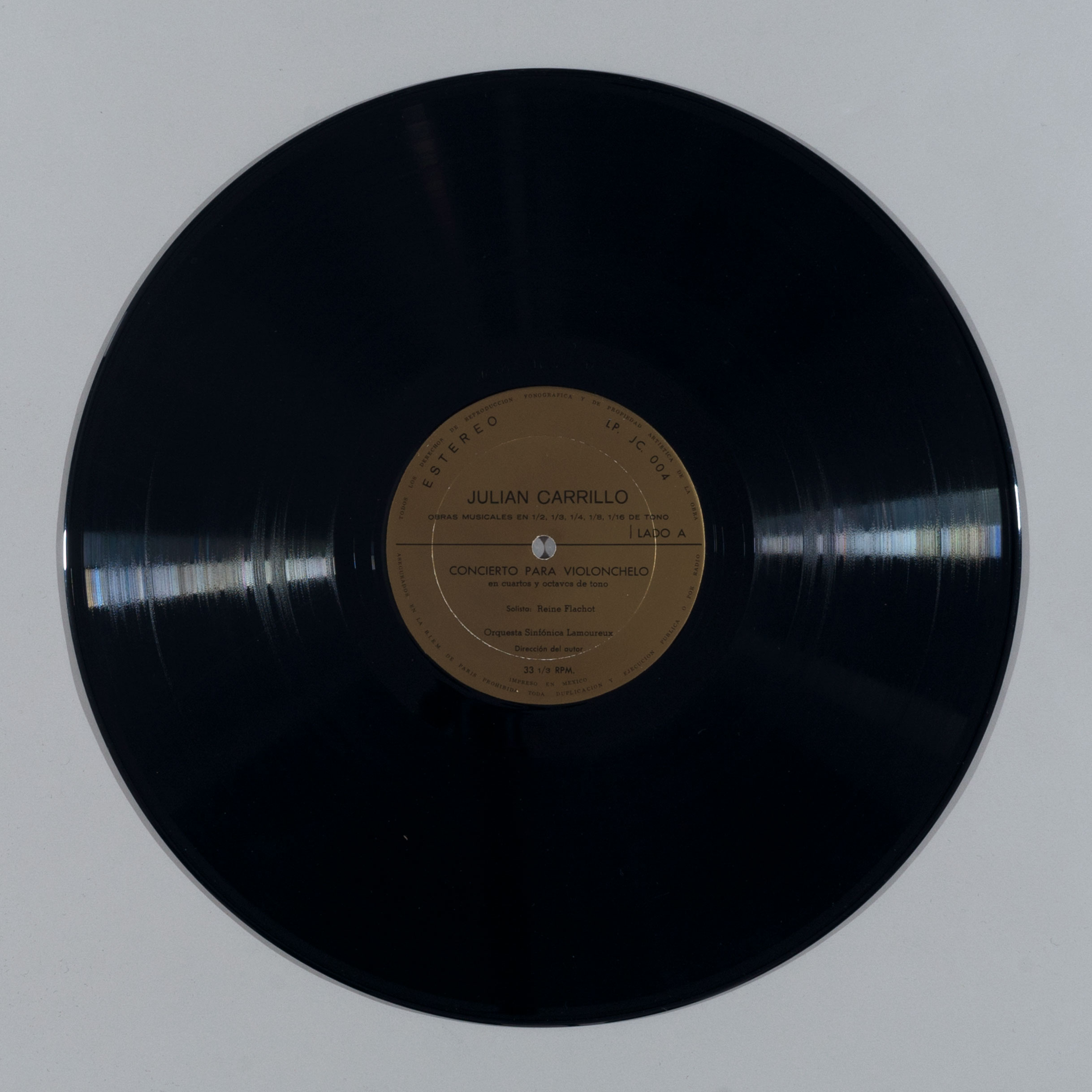 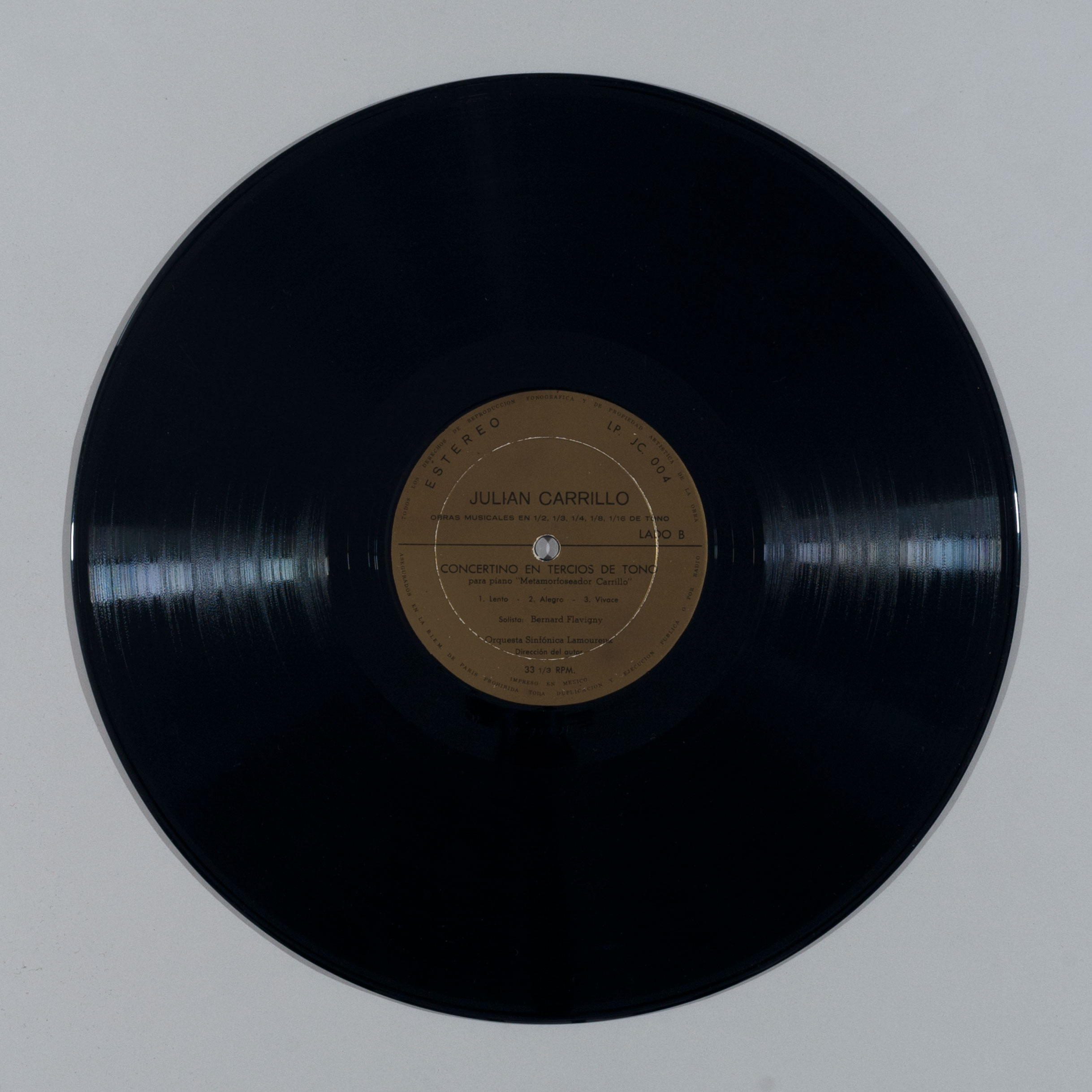 CONCERT IN QUARTER AND EIGHTH TONE FOR CELLO