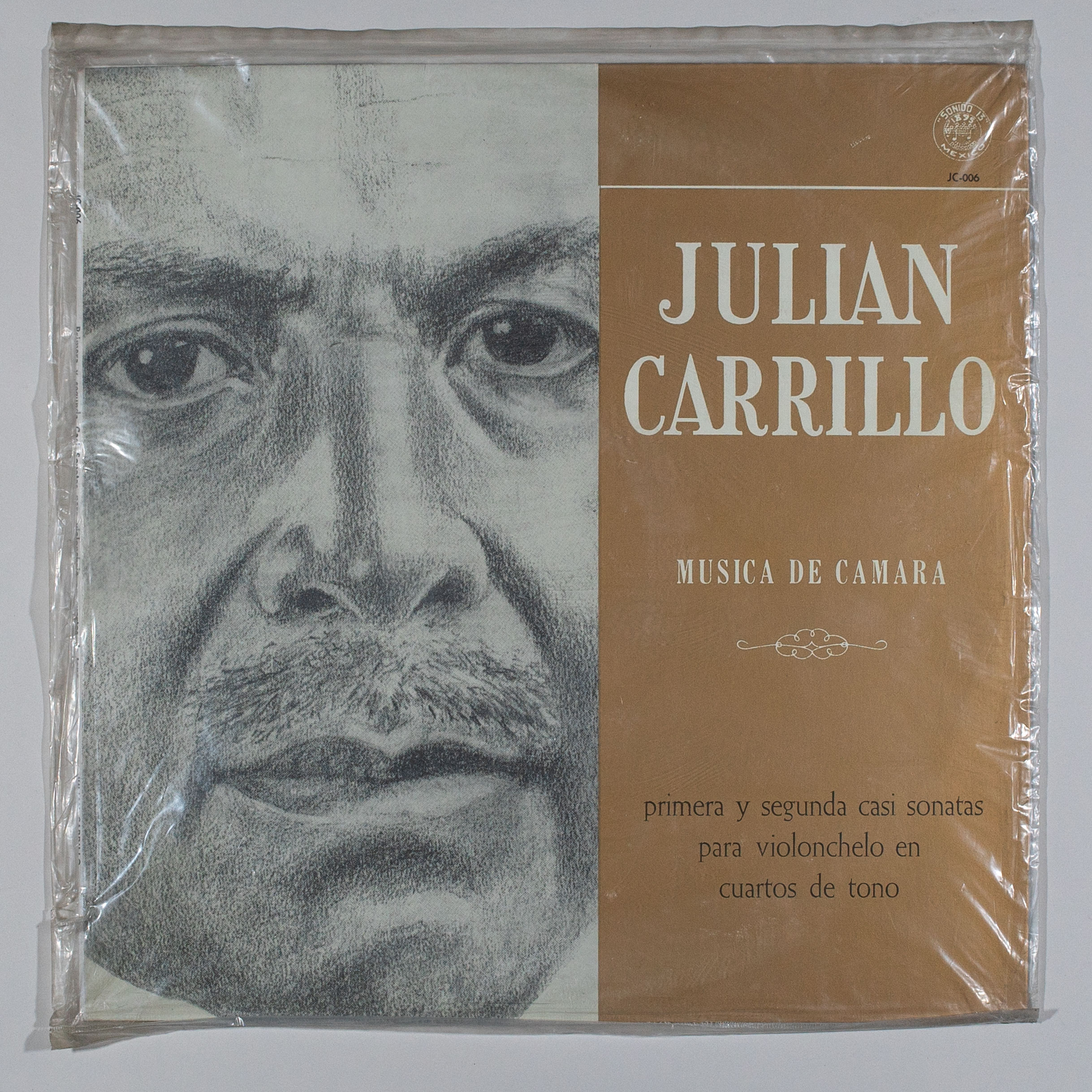 By this name, Carrillo wants to indicate a composition that is not strictly bound to the “Classical Sonata” form and is therefore closer to the “Sonata Almost Fantasy”.
In each of these three works, the composer abandons not only the system of the twelve classic sounds, assuming that he uses quarter tones, but also the principle of rigorous time and measure, leaving the performer the greatest freedom of interpretation, as usually do in the cadences.
In addition, these sonatas represent the highest expression of virtuosity in the cello and the extraordinary use of harmonics should be noted above all. This virtuosity allows the soloists to show off a transcendental technique and for this reason they will occupy a prominent place in the repertoire of higher studies at the Conservatories.

These three Quartets are from the same period without this meaning that they describe the same interior landscape.
Julián Carrillo, with extraordinary ease, knows how to escape time and flee from the smallness of the present and consequently reveal very diverse inspirations.
On a purely musical level, they present three main characteristics: the use of quarter tones as real harmonic elements and not as passing notes in hyperchromatism; an extraordinary counterpoint in which each of the four voices has equal importance; and finally, a virtuosity that represents progress in the technique of bowed instruments, as are the Casi Sonatas for cello and the Sonatas for solo violin in this same collection.

Julián Carrillo arrived in Europe at the beginning of the century as a brilliant violinist. He was violin first in the Leipzig Gewandhaus Symphony Orchestra, conducted by Arthur Nikisch and later obtained great distinctions such as the First Prize unanimously and with distinction in the International Competitions in Ghent, Belgium.
I think it is necessary to remember this background, because writing works for solo violin is not very frequent and for its perfect realization it is necessary to know not only the art of composition, but also to possess the technique of the instrument to the maximum degree.
Until today these conditions had only been met in the admirable Sonatas of Juan Sebastián Bach.
The works that we present here are dedicated to Paganini, the prodigious artist who deserves the gratitude and homage of every violinist for the progress that his compositions represent for the technique of the instrument; but in Carrillo’s Sonatas the transcendence of the technique surpasses that of those famous Studies.
We will also point out the use of harmonics and successions of chromatic fifths and fourths that were unusual until today.
The Paris Conservatory organized a contest for the execution of one of these works and the “Julián Carrillo Prize” was awarded to the winner.

The concert began with a difficult partichela: the Third Sonata for solo violin. This composition, in which Maestro Carrillo poured all his knowledge of violin technique, has the sobriety of the German school, which the maestro cultivated in his early days, as well as the technical bravery that he achieved in his most unusual horizons. Surely this last characteristic was what motivated the dedication to Paganini, of this sonata. Maestro Carrillo has undoubtedly been one of our best violinists and the best proof of this is in this work.

Of the works presented in the collection, this is the oldest and was premiered in Leipzig in 1901. Like the First Symphony, we find in it an amalgam of Latin sensibility with a technique that Brahms could have signed. The work is classical. The thematic unit is treated in it with great delicacy.

During the time that Julián Carrillo was studying in Leipzig, the cult of Beethoven was at a maximum of intensity that was never repeated afterwards.
Influenced by this environment of admiration, when Carrillo returned to Mexico, he founded an orchestra and a Beethoven quartet. Later, as a violinist, he played the Sonatas of the Bonn master on multiple occasions and as director of the Mexico Symphony Orchestra, he took on the task of presenting a Festival with the New Symphonies and Concerts, both for piano and for piano. fiddle. The Ninth was performed before an audience of fourteen thousand people; and less than five years ago (when Julián Carrillo was already over eighty) he was called once again to direct these works.
The Quartet dedicated to Beethoven, is of a very complicated polyphony and in it very novel procedures are used, which, however, clearly reveal the feelings that animated the composer when writing it and that he indicates in the different movements: Allegro Appasionato – Slowly – Allegro Jocoso – Allegro Final.

End of the second side, MEDITATION and IN SECRET

These small compositions for bowed instruments were written especially for the Philadelphia Quartet in 1927 as a study for quarter tones, and yet they were premiered in a public concert as the final number of a program featuring one of the last Beethoven Quartets.
They have been played numerous times with great success.

During the International Music Congress in Rome in 1911, Julián Carrillo presented his point of view about the reform of the classical forms of the Quartet, the Sonata, the Symphony and the Concerto with the idea of putting them in tune with the times. .
Search for a maximum of ideological unity while achieving a balanced polyphony in the different tenses.
Such was his thesis perfectly illustrated in this work, in which the initial theme is developed in the four beats of the quartet according to the principles of the strictest and most ingenious counterpoint, which produces a magnificent result.

Secondly, the magnificent quartet in E flat major, by maestro Carrillo, was played. This score deserves special comment. It consists of four magnificently developed pieces. The first movement, in sonata form, contains an overflowing joy that contrasts with the sweetness, somewhat peasant, of the second theme. The solemn majesty with which the introductory theme is presented to us, suggests the Gothic cathedrals, but not in the medieval warhead, but in that horizon that the saint called: supreme spiritual joy. The allegretto, draws in the arcades of the quartet a diagonal series of themes that merge into a sound warp that would have amazed Stámitz.
The third movement, scherzo, ternary and vivacious, contains the composer’s jovial passion, which has been felt until now, from his stately mansion in San Ángel, and lastly, the allegro con Fuoco, is a true lesson in the technique of the counterpoint, that the revolutionary teacher leaves to today’s youth, who lose their concerns in meaningless essays. Finally, he returns to another solemn theme to brilliantly end the quartet with a “stacatto” phrasing signed by the cello.

The Mexican Culture Seminar celebrated Julián Carrillo’s 90th birthday with a program dedicated entirely to his music.
What turned out to be a positive revelation for us was the Quartet in E flat (1903) written in Brussels when Carrillo was 28 years old. It is a monumental work in its formal conception (35 minutes in length), in its contrapuntal treatment, in sounds that reach the borders of atonality, in the virtuosity that it requires from the performers and in the interest aroused by listening to through its four tenses: Maestoso-Allegretto, Scherzo, Largo-Larghetto, Maestoso-Allegro.
One day the musical personality of Julián Carrillo will have to be reassessed and we hope that this reassessment will not take long, since the knowledge we have of his music, in his own homeland!, is very incomplete.
The seriousness and depth of his work is demonstrated by his handling and absolute mastery of classical forms and “traditional” composition. The term “traditional” is, in Carrillo’s art, very relative, because with the hearing of his Quartet of 1903 it has been fully demonstrated that the national and popular elements had already been taken into account by this great musician much earlier than people imagine. Suffice it to say that when Carrillo wrote this monumental work, Carlos Chávez was four years old, the same as Revueltas. Surprising, for all reasons, hearing him. It was a real revelation for us.
That Carrillo is beyond what we can imagine is shown by the fact that, having composed this work in 1903, he subsequently abandoned all traditional systems and launched himself fully into the investigation of tone fractions that led him to the construction of special instruments for its execution, instruments that, we have no doubt, will be more useful to the musician of the future than to that of today. Carrillo, the non-conformist, the man for whom his classical studies or tones and semitones were not enough, renounced them to live within a sound universe, to which Western culture will one day have to address itself. It was inevitable that he would be left completely alone, that he would be treated as a madman and a charlatan, and that war would be declared on him. But… This, between us, is a privilege.

FIRST ATONAL QUARTET dedicated to Debussy
We have already mentioned the profound admiration that J. Carrillo professes for the great French composer, Debussy, whom he met in Rome in 1911, during the Music Congress, in which Carrilo was elected President.
Recently, Carrillo presented in Mexico the initiative to erect a monument to Claudio Aquiles in that city. How many French cities can be proud of having paid such tribute to one of the most extraordinary geniuses of our country?
This Quartet, although Atonal, repudiates all aggressiveness and lets the composer’s emotion shine through. It is a work of vibrant dynamism. 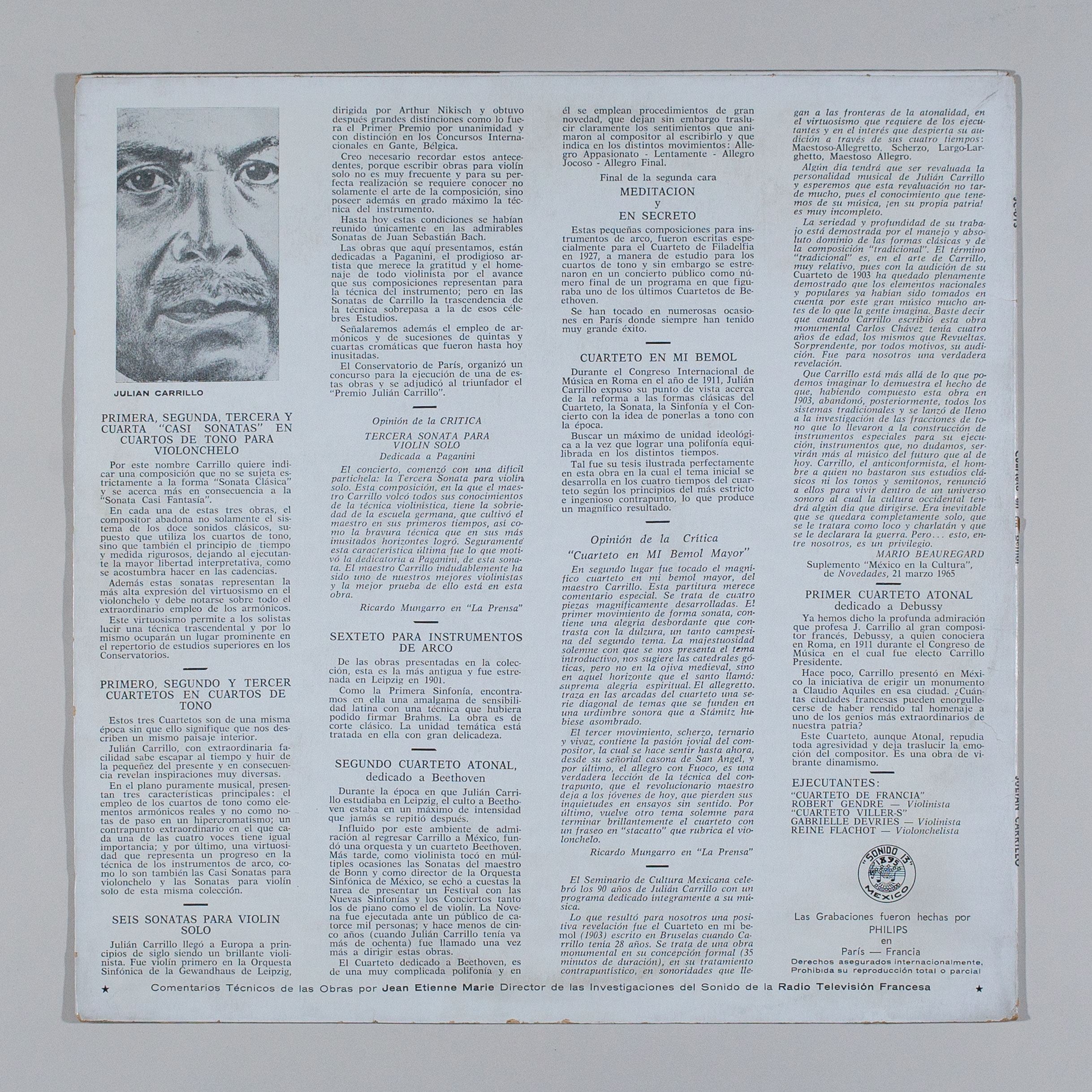 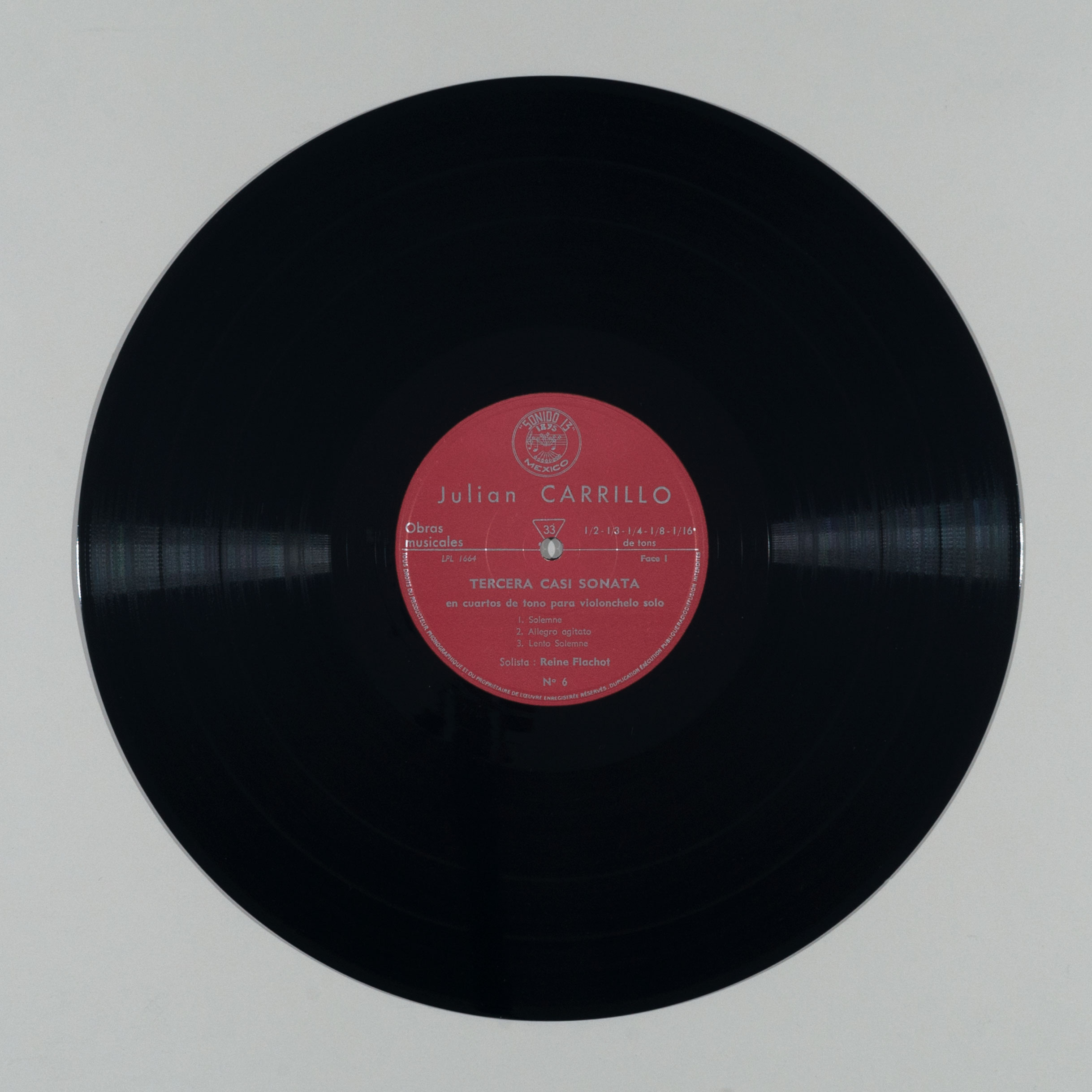 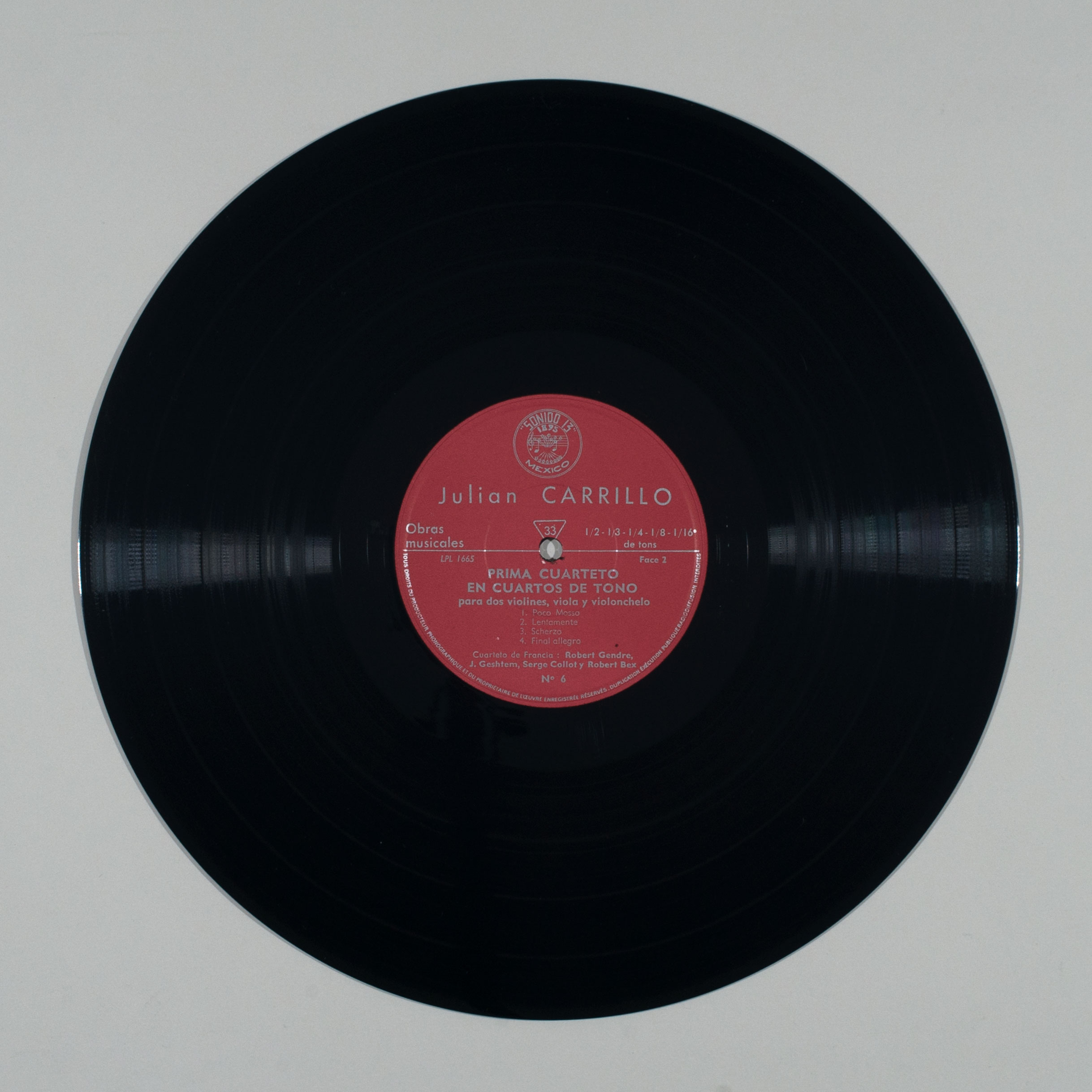