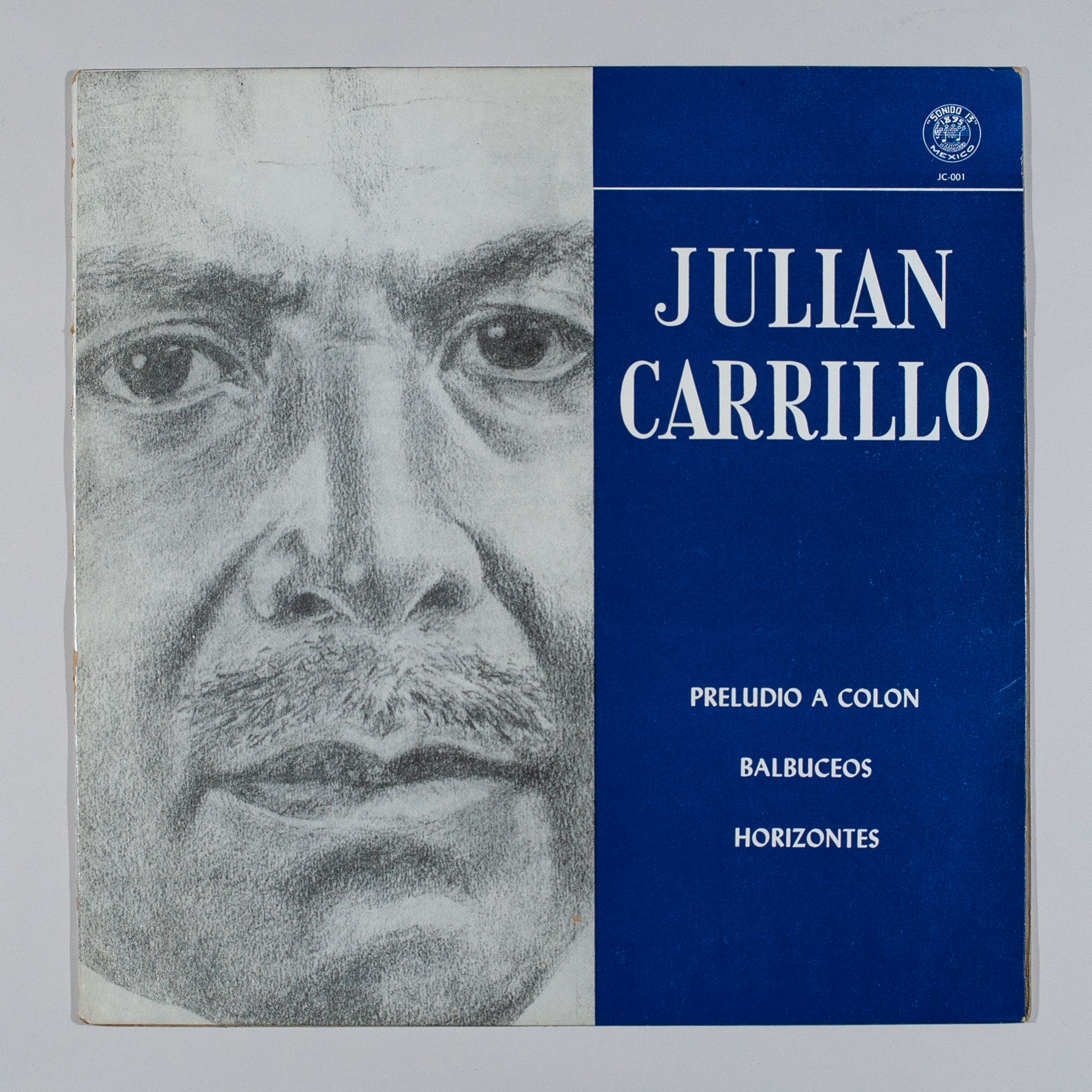 “PRELUDE TO COLUMBUS”
In 1/4, 1/8 and 1/16 tone instrumental ensemble and soprano.
Soloist: ANNIK SIMON

It is the first work written in the new system created by the composer. Dedicated to the great navigator who discovered America, it seeks to describe the impressions of fear, amazement and content joy that are experienced when unveiling the mystery of a new universe.

A sixteenth tone harp, a quarter flute and a string quartet create the sound atmosphere in which the voice unfolds in delicate arabesques written in quarter tones.

The work premiered on February 15, 1925 in Mexico, in the first concert in the world, with this new music and during which the enormous emotional possibilities of the sixteenth tone harp were discovered.

Months later, several works by Julián Carrillo were performed in New York and Philadelphia, under the direction of Leopoldo Stokowski, with enormous success, among others a Concertino for a small instrumental ensemble with symphonic orchestra accompaniment.

The Prelude to Columbus, was conducted personally by the author, in the new UNESCO room in Paris, in 1958, before an enthusiastic audience.

No other name could express better than “Balbuceos'”, the initial attempt, the first adventure of a composer, who tries to penetrate the unknown world of the sixteenth tone.

This work was written at the request of Leopoldo Stokowski, for a Contemporary Music Festival held in Houston, United States of America, where it was premiered on March 18, 1960, by the composer’s daughter Dolores Carrillo, pianist, under the direction of that famous orchestra director.

Once again, at the request of Leopold Stokowski, this work was written. The eminent conductor conducted it in 1951-1952 in Pittsburgh, Washington, Minneapolis and Baltimore, and was so successful that it had to be repeated at the request of the public.
It is like a meditation for three solo instruments, violin and violoncello, which play quarter and eighth tones and the harp of sixteenths, surrounded by the sound atmosphere created by the orchestra.

In it, the composer tries to evoke the contemplation of a new musical horizon, blurred by the mysterious mist of unknown facts and that developed over time…

The whole work wraps the listener in this impression of mystery and ends in a highly spiritual climate, in which the harmonics used insistently are like a symbol. “This music leads to ecstasy,” said an eminence upon hearing it.

At the express wish of Julián Carrillo, Jean Etienne Marie, Director of sound research at “Radioffusion Télévision Francaise”, was in charge of supervising the technical production of these recordings, with the collaboration of first-class soloists from the Lamoureux Orchestra. and the Philips Company.

J. E. Marie, is an avant-garde composer, a disciple of Olivier Messian and Darius Milhaud, and he has just confirmed his prestige by directing Igor Markewitch a composition of his: “Images Thamaiqyes for magnetic tape and orchestra, whose triumph had a great resonance .

The French pianist Nelly Carón said: “Yesterday I had the emotion of hearing your work that truly evokes the outer spaces, and that awakens planes in us usually in lethargy; it is a true “Song of Heaven”. Allow me, teacher, to simply say THANK YOU for the beauty you have brought us”.
Paris France.

“Interesting and DIFFERENT was the work Balbuceos by Julián Carrillo, written especially for a sixteenth tone piano. Composer Julián Carrillo, 83 years old and with beautiful white hair, sat by the piano, while his daughter Dolores played those sounds almost mermaid, which are more important, for REPRESENTING THE BREAKDOWN OF THE TONAL BARRIER than as a mere musical composition, since it was a TRUE DISINTEGRATION OF THE TONE, AS THE ATOM DISINTEGRATED”.

Stokowski and the Symphony, applauded for their wonderful performance at the premiere.

Horizons proved to be the most challenging work a concert audience has ever heard, and Stokowski deserves the highest praise for presenting it.

The effect it produces is one of RARE BEAUTY; sometimes you hear the whisper of the wind; others, it would be a complaint, and at times, remember the slight rise and fall of a sound when the wheels slide on the snow.

It is new and interesting music and we must recognize Mr. Carrillo’s tremendous originality and energy to experiment and create in a powerful way, full of intelligence and above all, IT IS MUSIC.

Despite his 76 years, Mr. Carrillo’s genius reflects THE SPIRIT AND AUDACITY OF YOUTH. May God grant him many more years of life to carry out his noble commitment for the good of the art that he professes.

Stokowski before the ovation asked the public if they wanted to hear the work one more time, the applause indicated the affirmative and Horizontes was played for the second time.

Stokowski, the acclaimed idealist at the premiere of “Horizontes, symphonic poem by Julián Carrillo A SURPRISING COMPOSITION THAT WILL SURELY FEED THE HARMONIC IDEAS OF COMPOSERS FOR MANY CENTURIES TO COME.

Contrary to Schonberg, whose themes are developed within classical molds, Carrillo has let himself be carried away by some atavistic atom of his Mexican ancestors and has created a symphonic poem that could well be called “Maya” or “Aztec Night.”

“Under Stokowski’s direction, the challenging composition “Horizontes”, by Julián Carrillo, was premiered in Pittsburgh, and as its title indicates, it reflects a tranquility of soul and awakens deep and poetic impressions in the imagination. Its beauty is strange, moving and original.

The Coda leads to RAPTURE and will leave an unforgettable impression that gently seems to fade into infinity. The author was at the premiere, and received a tremendous ovation amid delirious enthusiasm.

Frederick Dorian. Director of the Orchestra of the “Carnegie Institute”, Pittsburgh.

The recordings were made by PHILIPS.
in Paris France. 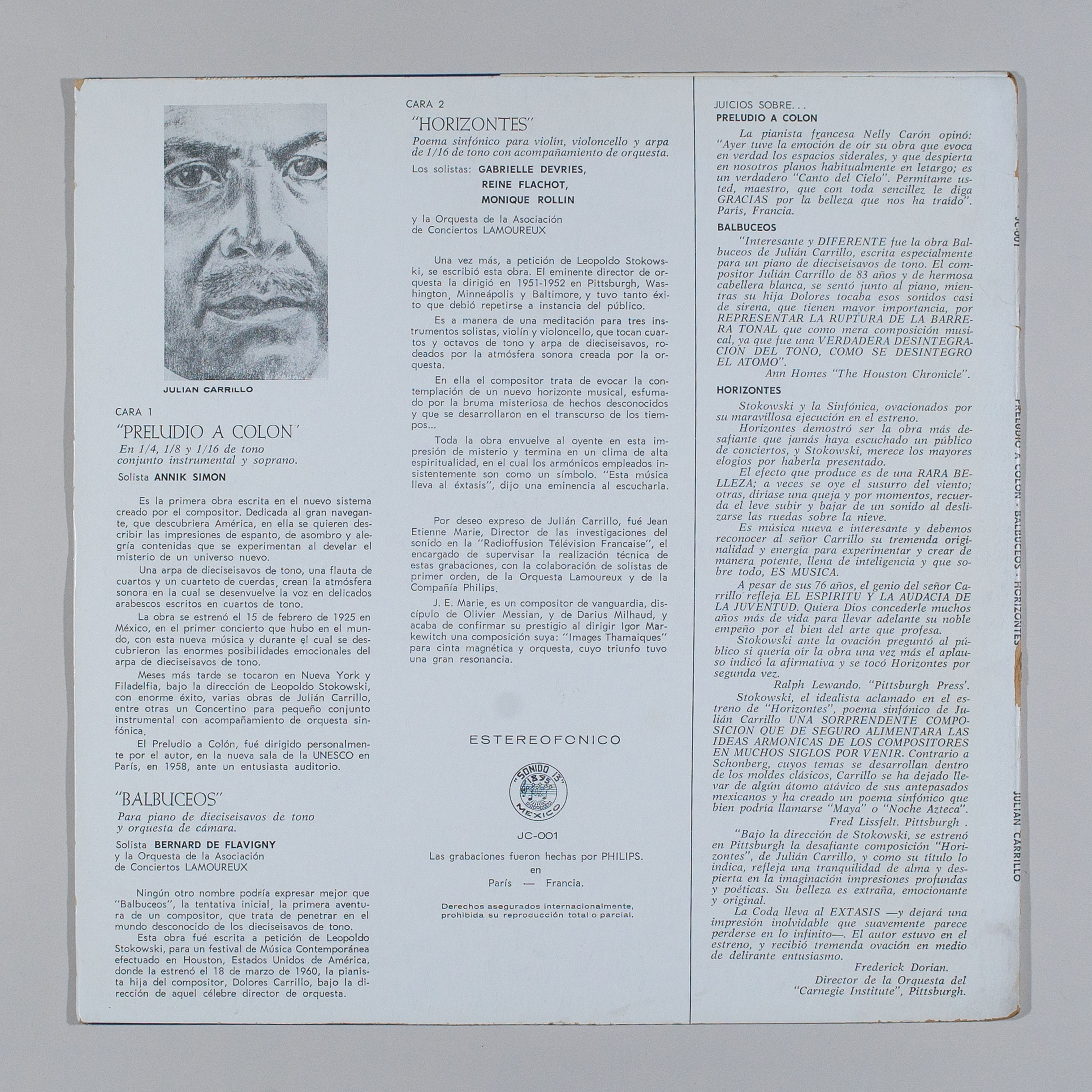 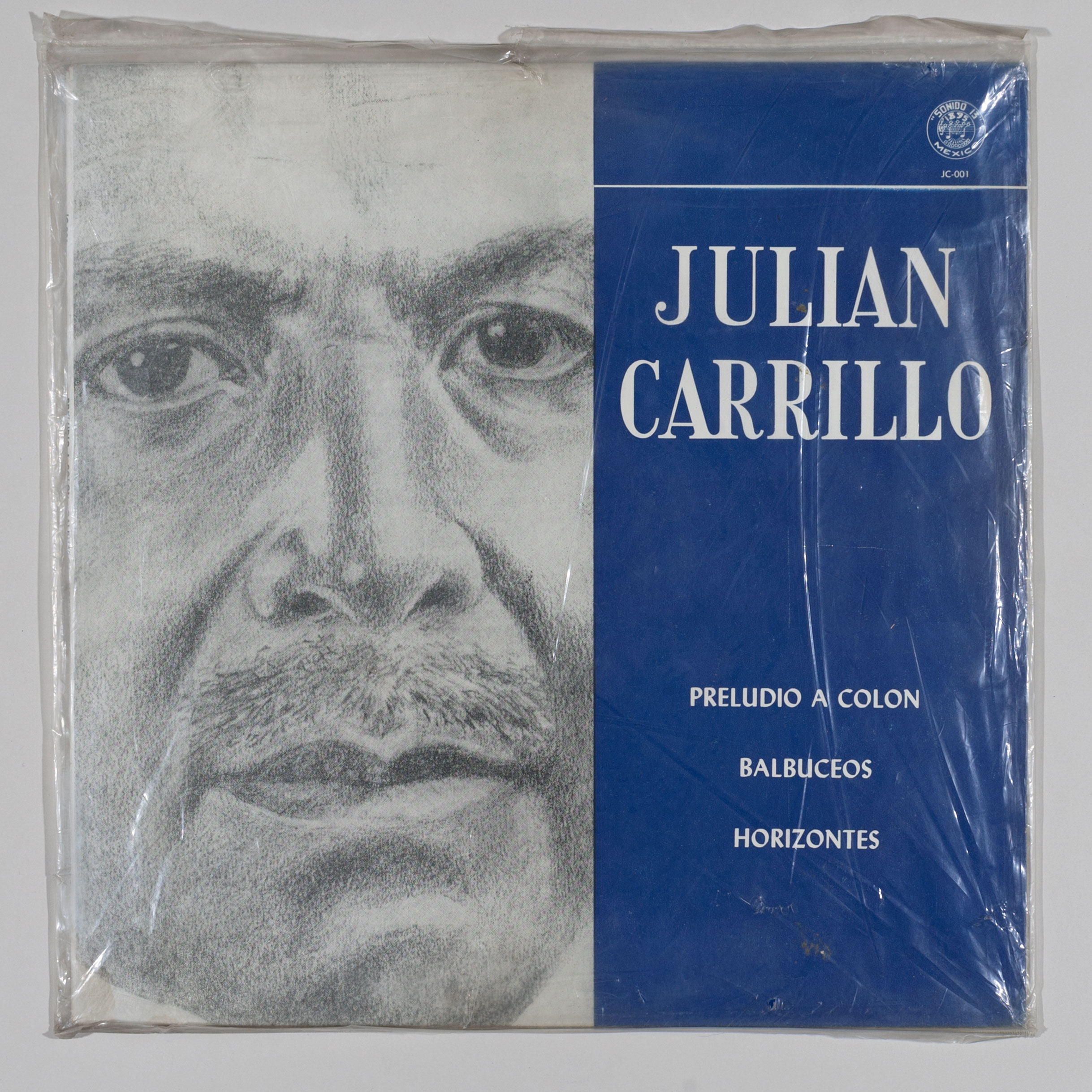 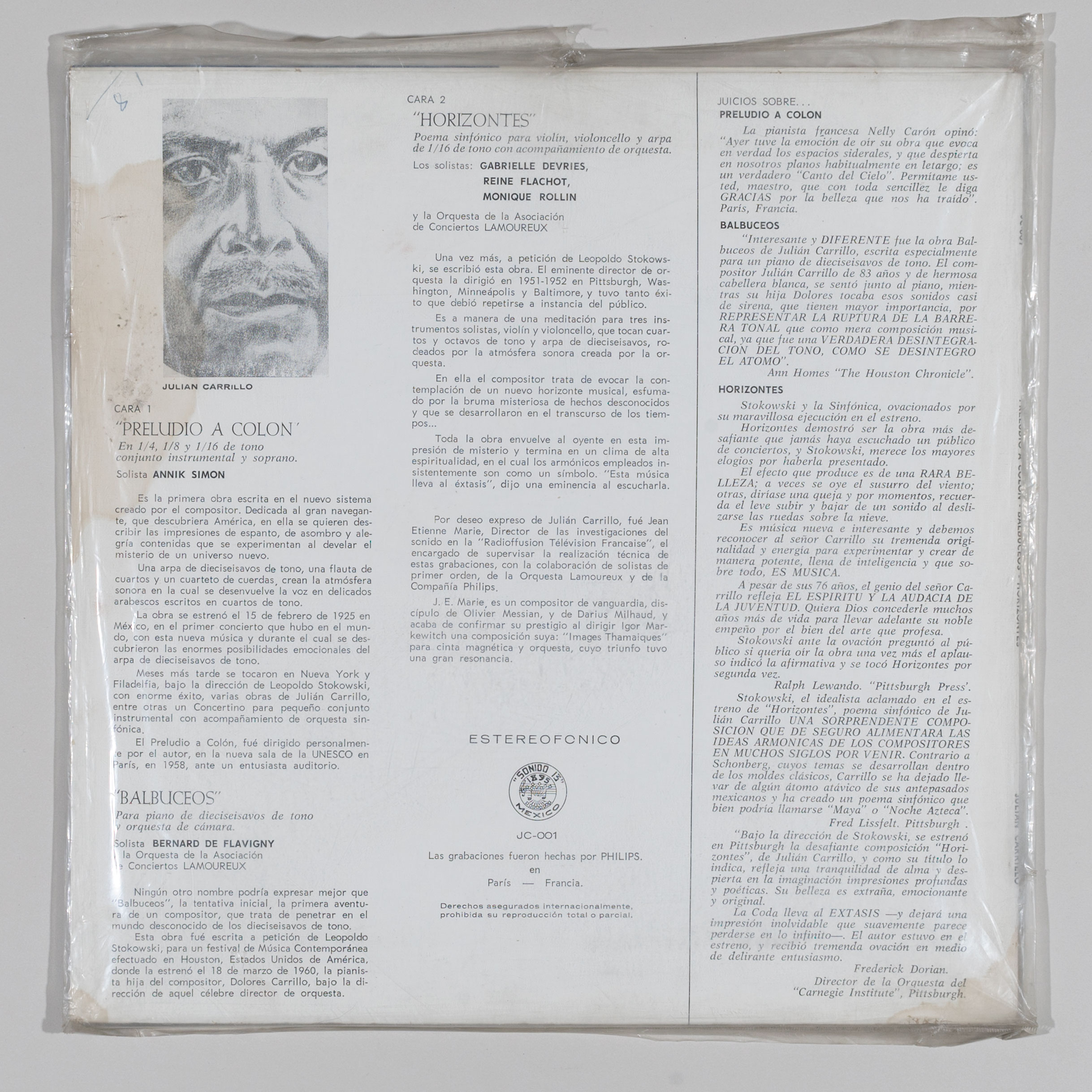 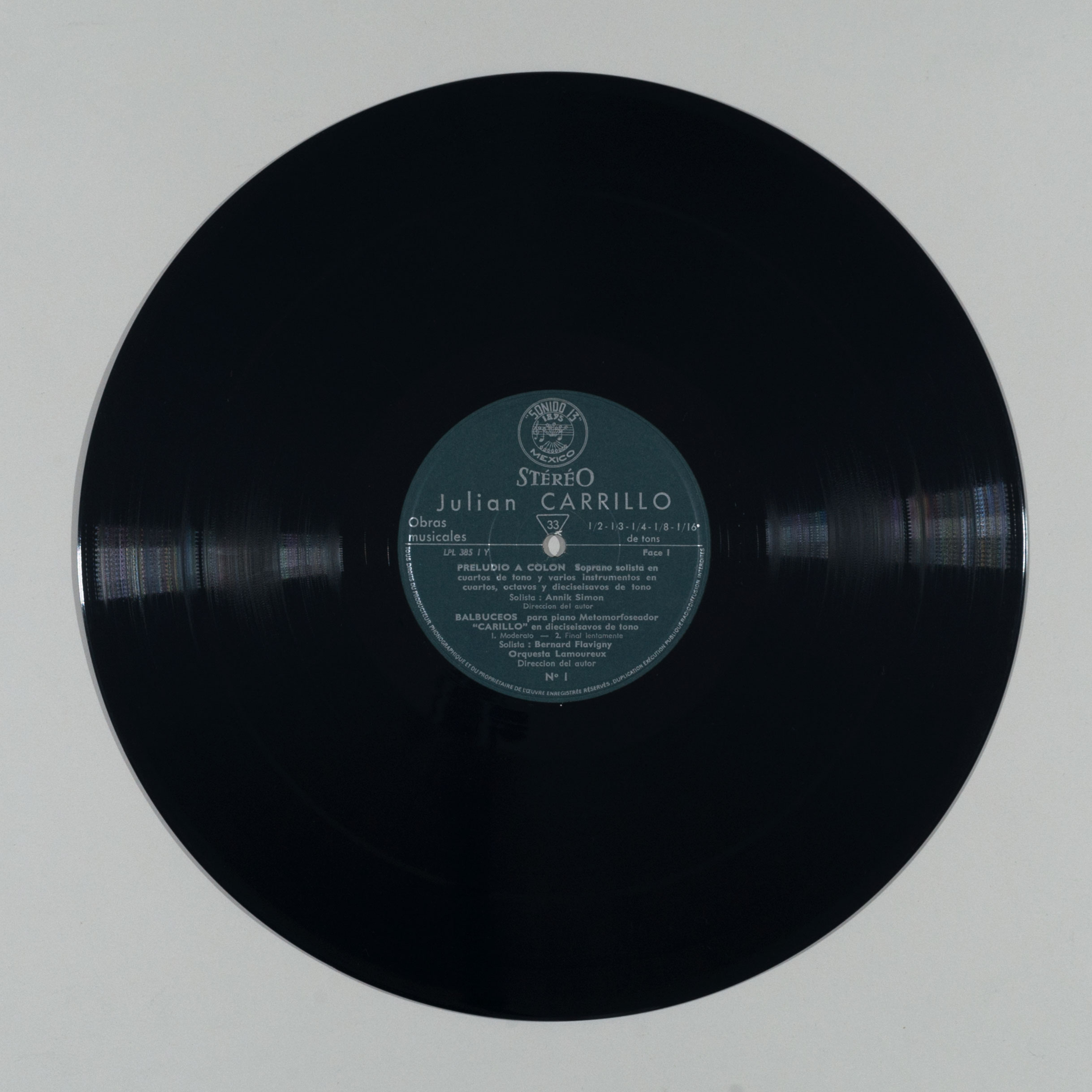 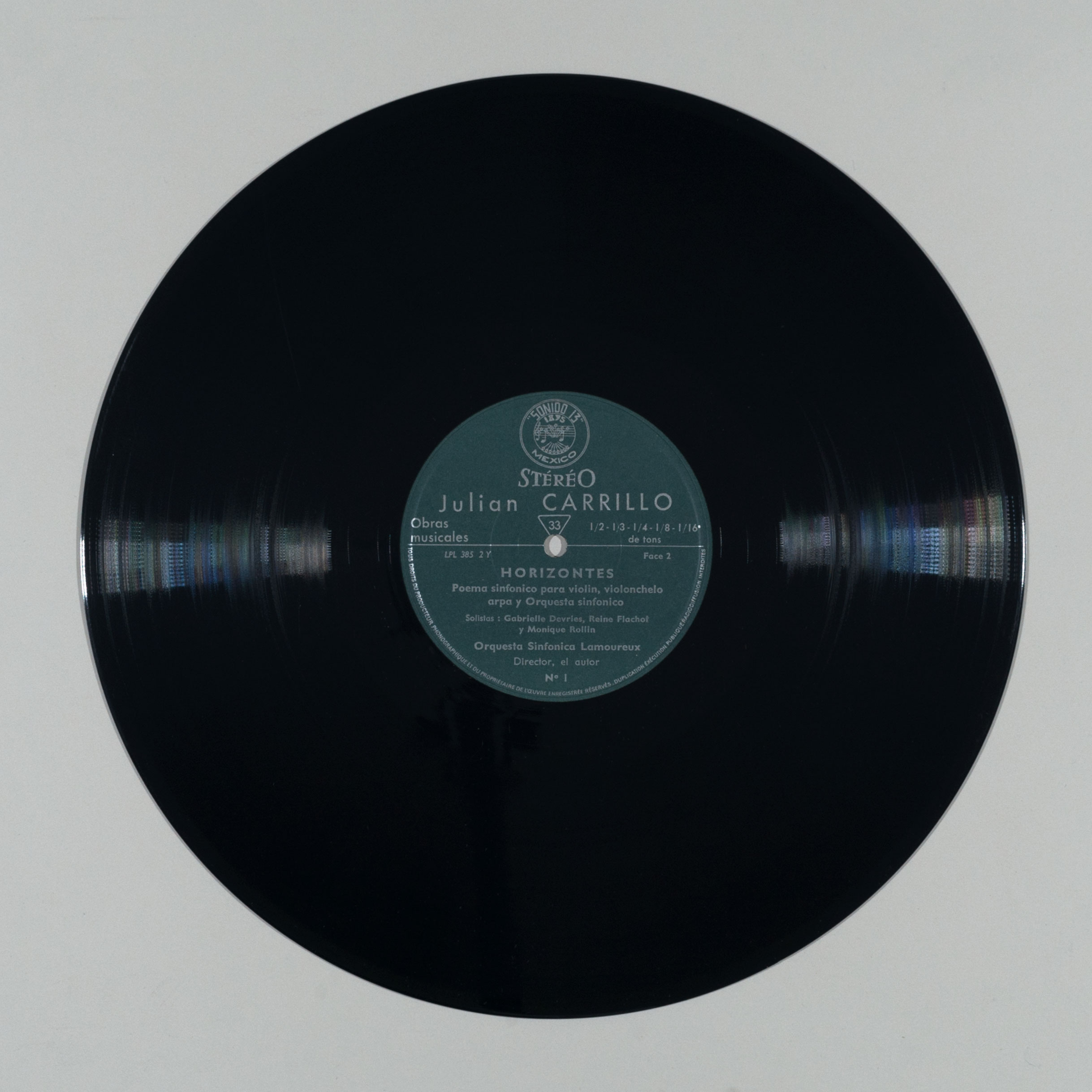 Annik SIMON
From the Paris Opera